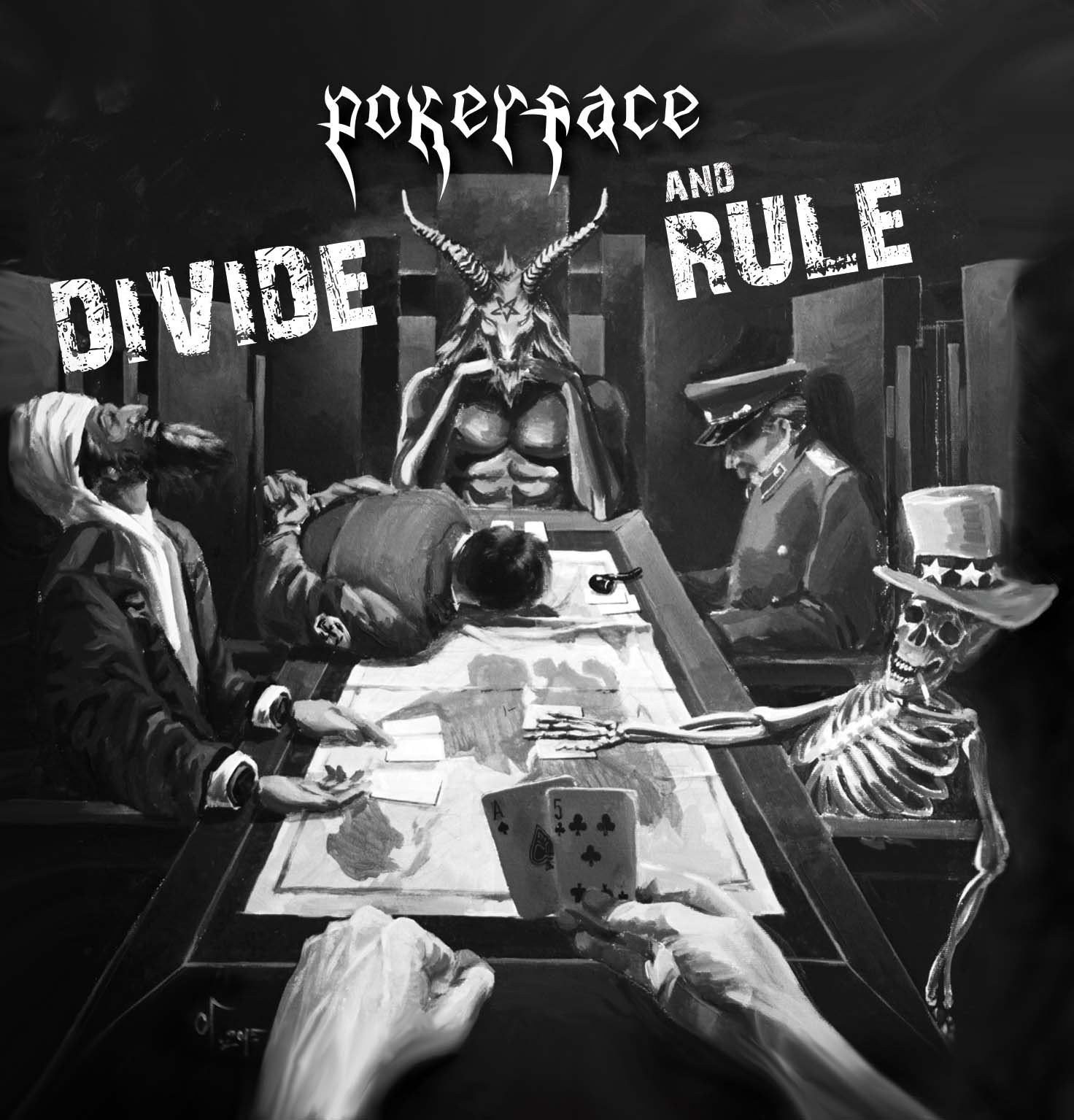 Pokerface are a new comer on the underground thrash metal scene, enraged and guided by the cold Moscow spirit. These Russians released their first full-length this year and are a great turn-on for all thrash metal enthusiasts. Only two years after their start-up in 2013, Maniac (lead guitars), Nick (guitars), Doctor (drums), DedMoroz (bass) and Delirium Tremens (vocals) gave birth to Divide and rule – ear-piercing speed/thrash monument of metal. Only one previous release has set up the terrain for the hard underground steps the band needs to take. The 2014 EP Terror is the law made it possible for Pokerface to share the stage with virtuous metal packs, such as Sepultura, Kreator, Megadeth and Vader. Now they are going in deeper and on their own, in a grand hope to overcome even those from which they learned. Molot Records took them under their umbrella and put a big confidence in Pokerface. So let’s see if the investment is worth. 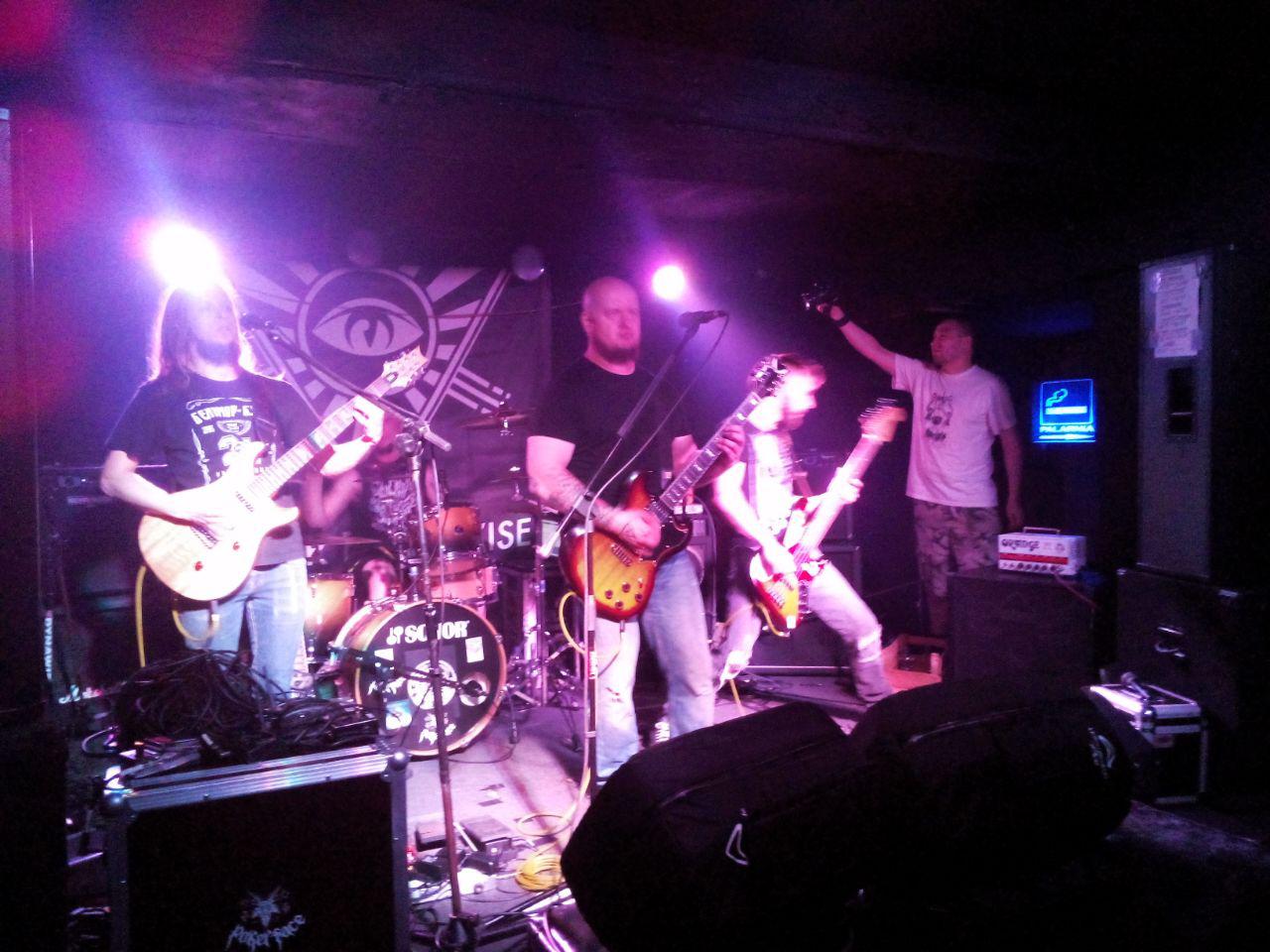 Divide and rule contains ten tracks and a spinning time of less than 40 minutes; sufficient timing for a starter release with a lot to say. In general, all you get is pure thrash/speed metal combined with the death metal influenced vocal of D.T. She sings strong and ruthless about topics such as aggression, satan, anti-religion, terror and blood, while her gang keeps her mad with fast and delusional thrash background. There is always one risk considering first albums, especially in thrash metal, and that is the maturity of it. Many new bands just press out the fastest and most minimalistic metal they can as their hormones require it. Sure, on Divide and Rule the same aggressive approach is all-over, but some segments indicate that the band controls the song-writing. The album starts with the carrier song Divide and rule, and as expected it is super fast with simple and straight forward speed metal riffs. The same goes for All is lie, the follow-up. And you may think in that moment that the band has been blinded by the image of their favorite thrash acts and just made the album by a certain scheme. Yet, that’s not the case. As the tension build in the first part of the album, the music tends to keep up with the initial tempo, while in mean time gathering the right details of intros (Kingdom of Hate, Chessboard Killer, Age of Terrorism), bridges and breakdowns (Killed by Me, Existence)¸and mastermind solos and leads (Human Control). Simply, every composition gives a certain new surprise, while keeping the original motion and feeling of Pokerface. Many modern elements were applied which for me is a great asset in forming proper thrash these days. Existence is an example of such and probably became my favorite song from this album already. The album closes with Shut Up! In a well thought approach of dynamics and breakdowns before vanishing in constant flow of distortion. Don’t expect anything mind blowing regarding the production. I guess it was purposely programmed to sound kind of raw and, hm, cold. Actually cold can be used as a music describing term for Russian thrash metal bands, as they always give me that feeling when I hear their songs. I know it sounds cliché, but for me is a fact. The connection of the different parts and lines is quite good and suitable to the voice and temper of the singer.

Surely Pokerface have a lot more to say in near future. This album, I warmly recommend to any experienced and inexperienced thrasher. Also keep in mind that the band often tours and plays abroad so don’t be surprised if the Moscow quintet destroys your local club any day now.

Terror is the Law ›